Using Toyota cars as the pieces, two shogi masters called out their moves over a loudspeaker in the Seibu Dome. Drivers would then scurry to the piece called and drive the vehicle to the designated square.

The match between Yoshiharu Habu, 44, and Masayuki Toyoshima, 24, was organized by Toyota Motor Corp. and Dwango Co., which broadcast the event over the Nico Nico Namahoso website that streams live video on the Internet.

Forty Toyota cars were lined up on the shogi board laid out in the Seibu Dome. The board was 54.2 meters by 33.5 meters. Each square on the board measured 5.8 m by 3.5 m. 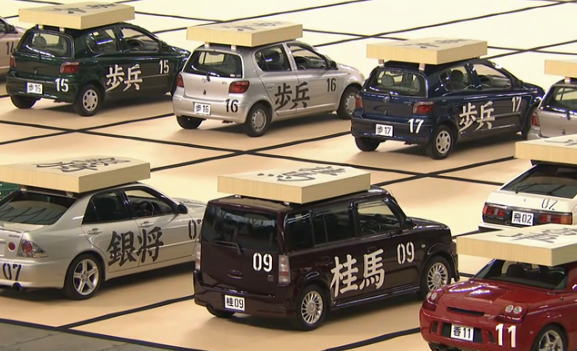 To highlight the difference in ages of Habu and Toyoshima, the cars under the command of the two shogi players were also from different generations. The 20 cars on Habu’s side were among the older Toyota models, while Toyoshima handled the more recent makes.

The Internet streaming of the event was designed to attract the attention of young viewers. Auto industry officials have long been concerned about the growing trend among young people today to avoid buying cars.

The cars had labels on their roofs that showed what piece it represented. The rules employed were the same as any normal shogi match.

Drivers from the automobile club of Waseda University as well as Toyota test drivers navigated the vehicles in line with the moves of the two shogi masters.