The Osaka Aquarium Kaiyukan is an aquarium located in the ward of Minato in Osaka, Japan, near Osaka Bay.
It is one of the largest public aquariums in the world. 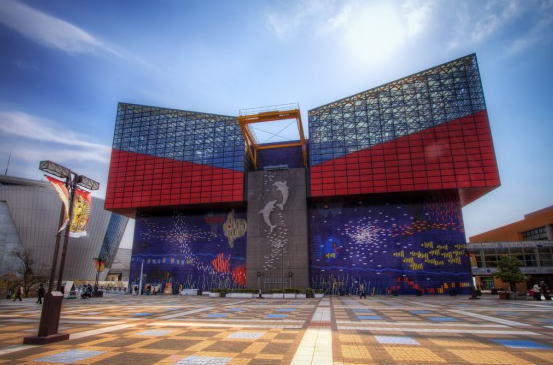 The walk-through aquarium displays marine life in several habitats comprising 27 tanks in 16 main exhibits with a total volume of 10,941 tons of water.
The habitats are from the Ring of Fire area of the Pacific Ocean. The largest tank is 9 metres (30 ft) deep and holds 5,400 cubic metres (190,699 cu ft) of water and a variety of fish including manta rays and a whale shark.

The tanks used in the aquarium are made of 314 tonnes (346 tons) of acrylic glass.
The largest single pane measures six meters by five meters by thirty centimeters and weighs roughly 10 tons.
At the thicknesses used, regular glass would be unwieldy and would not have the desired transparency. 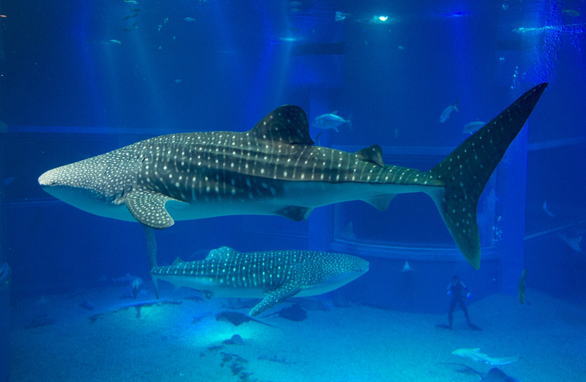 The guiding principle of Kaiyukan is based on the theory, “The Gaia hypothesis” advocated by British scientist James Lovelock, which proposes that “all organisms and their inorganic surroundings on Earth are closely integrated to form a single and self-regulating complex system.”
“The Ring of Fire” is the circum-Pacific volcano belt which surrounds the Pacific Ocean. It overlaps “The Ring of Life” with its high-density biodiversity.
With the concepts suggested by these two “Rings”, Kaiyukan recreates natural environment around the Pacific Ocean as faithfully as possible.
It is our sincere hope that all the visitors feel and reconsider the preciousness and wonder of life and the importance of nature environment all round us.