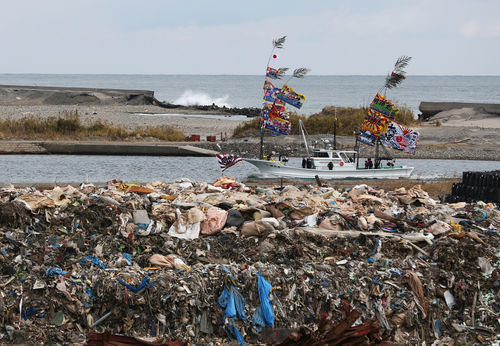 MINAMISOMA, Fukushima — Toshiyuki Onoda, a 63-year-old fisherman from Namie, Fukushima Prefecture, celebrated a launching ceremony for his new fishing boat on March 10, three years after he lost his old fishing vessel to the tsunami caused by the 2011 Great East Japan Earthquake.

His new fishing boat hoisted various banners signifying a big catch as he held the launching ceremony at Minamisoma port with fellow fishermen in prayer for safety of navigation. But a mountain of debris was omnipresent along the waterway to the port.

Onoda relocated to Tokyo with his family due to the meltdowns at the Fukushima No. 1 Nuclear Power Plant but decided to resume fishing, encouraged by the sight of other fishermen who had also lost their boats to the tsunami returning to fishing.

”Three years after the disasters, I can finally take the first step in going fishing,” he said.